How do You feel, when You do not know?
All of us are familiar with this feeling. But some of us do not distinct between causes.

Everyone experienced situations where You do not know. Most of us remember the origins back to the early days in school. If You do not know, You missed to learn properly. So what do You do?

Learn harder, learn more, gain knowledge to pass tests.
Why? To to get over barriers at the gates to the world of the successful, valuable members of society – the so called ‘Establishment’.

It was alright, back in the days of industrial production. It was sufficient to gain knowledge to run machines and produce in mass.

Now, wind has changed, tides have turned. Influence of constant change, fired up by exponential growth of data, knowledge and technical possibilities lead to a significant change of the game.

There are lots of situations in which You do not know. Not because of being lazy and not learning hard enough or remembering facts incomplete. It is just because nobody knows, yet. It is a situation which is influenced by all players at the same time, on a field without visible orientation, following discrete or just-not-defined rules.

There is no ‘one’ secret organization, working on world domination. Maybe, there are a few – but not one. People, believing in ‘world domination’ suffer from a mindset which bases on one fundamental error far away back in youth, adhered up to presence.

A totally different approach is needed – far away from incorporating even more  knowledge or working several times harder.

It states the necessity to change method, option, perspective or whatsoever – once You noticed being stuck. Get outside the box. Take a step behind.

Those who are familiar with perceiving context as variable, changeable, fluent and volatile those know how to act upon this ambiguity. Others do not even recognized,  context has changed two sentences ago.

You can evaluate and sometimes change the mood of mind, the way to think, with a little test.

I assume, “everybody” knows 42. If not, get a glance of the story, following links I provide at the end of this post.

First, write down “= 42” to something You can show up.
Show it to the person or the crowd of people You like to test.

what do You need to balance both sides of the equitation?

Those who are currently focused, following a straight-forward mindset will answer “42”. And they are right. Those people know the sound of a clapping hand, they know how to describe and demonstrate immediately. 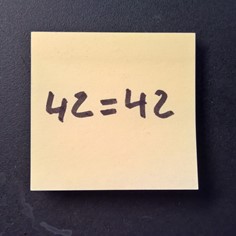 Others will answer – from my experience – in several iterations.

If You think a little further – in patience without feeling any pressure to answer immediately – You may find the problem to the answer.

Most problems are caused by being imprecise.

Yes, I know, some people are annoyed by doing one thing again and again until it is perfect. They might think and speak “we have machines for that” – and they are right.

Once You found out what appears to be considered as fundament to growth and prosperity, You can secure this fundament with revenues, You gain from selling a product again and again. By automation, You can delegate the inhuman reproduction-aspect and focus on human creativity.

In bad ole times, the real dirty and hard work was delegated to the so called workers class. Today, some of us belief in the equality of human rights. And it might be a little more human to outtask stupidity of work to machines, while the so imprecise, imperfect and by this “dirty work” of designing the process and specifying a product is done by people.

The success of mankind is based on the ability to fit to a given environment.
Hybris arose from the ability to fit environment to mankind.
Industrialization and misguided education systems generated people who are raised in this belief in engineering as they were forced into the so called MINT-disciplines.

They all long for this “one thing”.
This results in a desperate search for the key method: the “one-fits-all-approach”.

Sorry, guys. There is no one thing.
It is necessary to have at least three influences and at least five people working in tune with each other to create something of true greatness.
Some sight ‘The Art of Collaboration’ in that.

There is no one genius sitting around and instructing everybody else for doing great. There are just some individuals who realized great achievements which were witnessed by others and reported to even others and therefore legends were born.

Greatness needs witness and narration of an audience.

Back to the topic.
By being imprecise, some problems arise.
On the one hand, You can view at it all in whole. You do not distinguish between nothing. Is possible, but hard to cooperate upon.

On the other hand, everybody notices changes. Wheather, mood, seasons, … as time goes by. If You distinguish between everything, You end up in sub-molecular areas where core of the world is found. By limitation of design in human sensors, people perceive things on a more aggregated level.

So, You need to group, class, categorize, name, stamp, declare, document and all these actions to make world a little bit more handy.

And by these aggregations, You need a shared understanding of what they represent. That’s where trouble begins.

People understand differently. From what was experienced in the past, individual vision of reality is built from. This vision of reality is aggregated into beliefs. Beliefs are linked on one hand to indicators. Beliefs are linked on the other hand to action patterns. In the end, useful shortcuts from left to right will be implemented with a small, but very important glitch.

Peoples’ pattern to react on world is intended to be

IF <this> occurs THEN it indicates from all knowledge I have currently at hand, it will be best to DO <this>

EVERYTIME <you perceive this> DO <that>

And furthermore, they expect from their assigned managers and leaders, exact specification on what to do when and how. They behave as unprimed machines waiting for their initial upload of an operating and control system.

Any ideas where this results from?

Anyway, this approach works fine and saves lots of energy in a stable context. It speeds up and if You are good in conditioning Yourself, soon You get into “the FLOW” under these conditions. People can hold this state over an astonishingly long timespan.
Whatch Japanese forge masters working after second night without sleep to gain Tamahagane.

/activity is not enough

Every action You perform, inherits validity of its results from surrounding context.

You should do it, because it is right.

Correct is not enough.

You can perform a method correctly and desperately miss destination of the journey at the same time. By this, You get fast to where You completely miss the point.

Congratulations! This is, what I call the #EfficiencyError, meanwhile.

And You can reach a destination as result of some sub-optimal actions based upon some right decisions upon vague certainty – maybe late, but finally there.

Maybe it is a good idea to value effectivity over efficiency during the first attempts of approaching perfection?

/is it all so clear?

Uncertainty causes trouble in mind, certainty creates peace.
Would You like peace of mind lasting a little bit longer?
Would You like to spend energy on gaining long-lasting results, rather than consuming it with short-term efforts?

/You are the reason

Most conflicts arise from misunderstandings. In very few situations there is a fault which can be named as root cause.

So, just forget about fault.

It’s leading to nothing and consumes too much energy. In the end everybody sits in mental prison – without any capability to be a useful member for any society.

Free Yourself from imprisoning mindsets. Focus by limitation only where it is really necessary.

The key is tolerance. Acceptance of difference is the key to any process towards improvement. Its about progress, not about prfection.

Before You start acting, just check whether Your action pattern is fitting to the situation You are currently facing.

May all Your needs vanish into reality.
Live long and prosper.

Life runs in cycles. Some are smaller, some are bigger.
In the end, there is no end – only another beginning.

Talk to whom it may concern. And share what matters to You!

This will make the world a nicer place:

This well-known phrase is part of the very common, but less documented "dealer-customer-protocol".

In that protocol it is crucial to understand on what side of the bar You are currently standing and what expectations that triggers.

In other context (i.e. international Businesses) there are coaches that enable You to follow the cultural protocol of the people You like to deal with.

The up2U-protocol is to understand, negotiate and establish exactly that:
A universal protocol to approach the Uncertain and convert it into the reliability of a predictable certainty.

You can get everything to get in use of the up2U:
- eMail-Dialogue or Chat
- Videos or Webinars
- remote HandsOn
- Speaches (Impulse or Keynote)
- OnSite Implementation